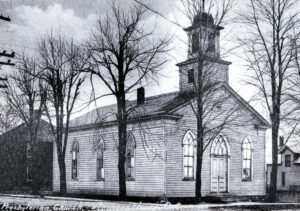 St. Andrew’s Presbyterian Church has been a landmark on the corner of Simcoe and Bathurst Streets in the Town of Amherstburg since 1846. However, the Church’s roots in our community go back to 1828.

St. Andrew’s began as a mission field of the Church of Scotland. The Rev. Alexander Gale, of Logie Coldstone, Aberdeenshire in Scotland, was the new congregation’s first minister. Gale labored for three years in his first charge, until an attack of malaria forced him to leave the congregation in 1831. He was succeeded by the Rev. George Cheyne, who arrived in Amherstburg in November of I831. He had been ordained a minister of the Church of Scotland on July 6, 1831 by the Presbytery of Strathbogie, and his call “to Amherstburg or any other place in North America.”

By December of 1831, the new little Church had a pulpit in place, and by March, 1832 pews were installed at the expense of those who would rent them. The names of some of Amherstburg’s earliest pew holders were the Kemps, Hacketts, McGees and Elliotts.

By May of 1846, the congregation was at worship in a new sanctuary which sits to this day on the corner of Simcoe and Bathurst Streets. The existing Church is one of Amherstburg’s heritage buildings. It is interesting to note that the original “carpenter gothic” wooden windows were installed by the soldiers of the Royal Canadian Rifles Regiment of Fort Malden.

Rev. Robert Peden opened the new Church in 1846. He was one of this area’s first public school teachers, but became noted as an outstanding preacher, However, he was far too generous in his understanding of the meaning of “salvation” than his Calvinist Presbyterian Church would allow. He eventually ‘left’ his ministry and went on to write, edit and publish a widely circulated journal called the Canadian Evangelist.

On February 28,1904, the Church celebrated its Jubilee. The Rev. Thomas Nattress, one of St. Andrew’s long-time ministers was then in the pulpit. Members of the Nattress family continue to reside in Amherstburg. His son, the late William W. Nattress was active in our community’s political life, and was a former Mayor of Amherstburg.

On April 22, 1928, at the 100th Anniversary Service, one of the great speakers was the Rev. Dr. Hugh Paulin of St. Andrew’s Presbyterian Church in Windsor. Dr. Paulin preached in St. Andrew’s, Amherstburg, frequently, and he was always received eagerly by the congregation.

A few short years before the 100th Anniversary, the Church was placed on a proper foundation, and given a basement for holding Church activities. Pleasing stained glass windows, many of which were given as memorials, and a new pipe organ was given to support the congregation’s worship. The late Mrs. Gladys Wilson, ‘sold’ organ pipes to members of the congregation in order to defray the cost of the new pipe organ. That same pipe organ was ably played by Mr. O.E. “Ness” Lewis, organist and Choir director of St. Andrew’s for 25 years.

In 1978 the 150th Anniversary was celebrated with worship and fellowship. There was the building of a new Manse on Laird Avenue to be acknowledged, and the erection of a fine Christian Education Building to be rejoiced over. Antique choir chairs were dedicated in memory of Mrs. Thomas Leadbetter, whose now late husband was the long-time clerk of the City of Detroit. A choir offering plate was dedicated in memory of Mrs. Lyle Lalonge whose family – the Kemps – were pioneer founders and members of St. Andrew’s.

The late H. Murray Smith, together with his wife Helen, was a long-time member of St. Andrew’s, as were Capt. Charles Hackett, Miss Gladys Dowler, and her aunt Mrs. Alice J. Mickle, who was the first woman member of St. Andrew’s Board of Managers. Dr. Edger Hutchinson, who together with his son Dr. Bruce Hutchinson, were the founders of the medical clinic that bore the Hutchinson name, was a faithful elder of the Kirk.

One of its recent long-time ministers is Rev. John W. Burkhart (1964-2001), beloved by the Amherstburg community. Today, the congregation continues in its faithful witness. The people of St. Andrew’s Presbyterian Church are proud to be a significant part of Amherstburg’s rich history.